We are overjoyed to announce that X Factor’s STEVI RITCHIE will be returning to Weymouth as he takes the role as the JESTER in our Christmas Pantomime Sleeping Beauty!

Stevi started performing at the age of 16 and trained at the London School of Musical Theatre and ALRA for the 3 years acting course.

Stevi then went on to perform in various Pantomimes around the country such as Buttons in Cinderella, Aladdin & Wishee Washee in Aladdin, Potty Pierre in Beauty and the Beast, Jack in Jack and the Beanstalk and most recently Tin Man in the UK Tour of The Wizard of Oz. 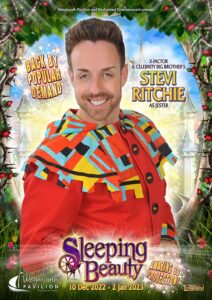 Stevi Ritchie first found fame on the X Factor 2014 where he placed 6th out of 16 acts and was the last wildcard standing mentored by Simon Cowell.
Cheryl bought him back as a wildcard after being knocked out of the competition at Judges Houses.

Since X Factor he has appeared on numerous TV shows such as This Morning where he presented the Prize Giveaway Competition as well as 8 out of 10 Cats, Celebrity Benchmark, Big Brothers Bit on the Side, Reality Bites & Who’s Doing The Dishes to name but a few.

Stevi then entered the Celebrity Big Brother house and came 5th in the final.

He since has released a single in Japan with Sony Japan with top Producer Mr Akimoto.

Stevi has a very supportive family and a wonderful daughter called Summer.

Stevi is delighted to be returning to Weymouth this Christmas in Sleeping Beauty where he looks forward to playing the role of ‘Jester’ and making everyone laugh.

You can see Sleeping Beauty at Weymouth Pavilion from the 10th December – 2nd January at 2pm or 6pm, tickets are already selling fast to make sure you book fast!